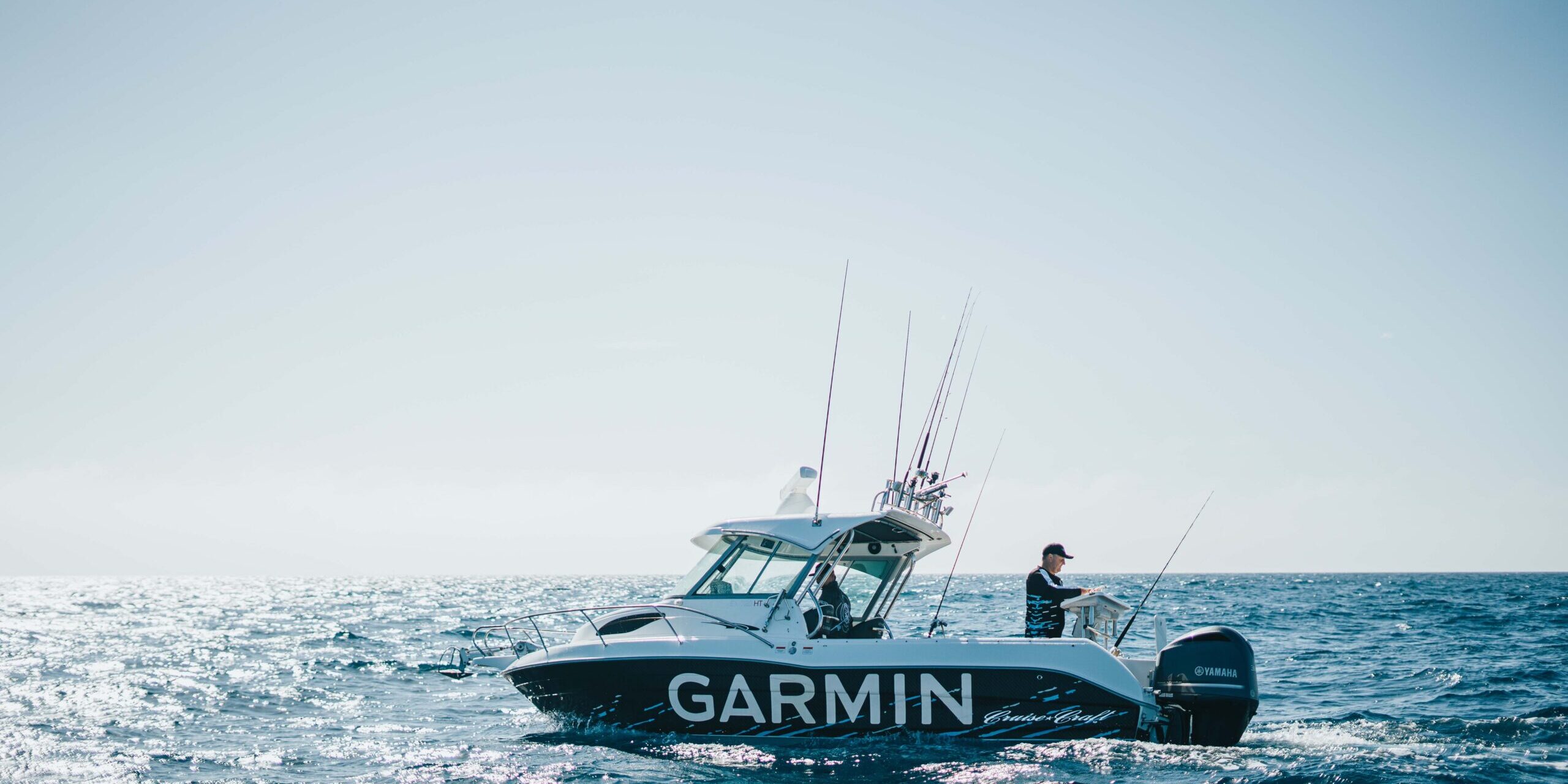 With the success of our Team Cruise Craft trip to Tannum in November 2020 we set ourselves a rather large goal to get as many members as possible to the annual Boyne Tannum Hook-up for 2021. Everything was looking positive (no covid), we had a large interest almost straight away with the registrations stacking up and the local Tannum caravan parks phones were blowing up.

With over 35 boats registered and 120+ crew members the event was looking to be something special. We had a great sponsorship backing for the event with Garmin supplying every boat with their own merch pack but also 3x Garmin Quatix 6 smart watches to give away each night (RRP $999), Wilson Fishing put together a tacklebox full of lures for each boat (Wingman Jigs, Fishtraps, Inkvaders etc.), Your Mates Brewing Co. supplied the beer for the first nights Meet & Greet plus 2 merch packs and TIDE Apparel with a large box of clothes for everyone to sort through.

Everything was under control, but Mother Nature had different plans forcing us to cancel the trip 3 days out and reschedule to a later date in July.

With the mad scramble re-booking accommodation, the majority of fisho’s were able to make the new dates work with a handful unfortunately being forced to pull out. With those who could not make the new dates a few new members filled their places, and the total number of boats didn’t change to much all we had to do was pray to the weather gods. 1 week out you couldn’t have asked for a better long-range forecast (variable winds) but that soon backflipped and 3 days out the wind was picking up, now we had too much invested, so we had to suck it up and just go!

4:00am Thursday morning we hit the road, arriving in Tannum around lunch time we had to prep for the night ahead. With the groups Team Cruise Craft WhatsApp chat going crazy with images of everyone arriving and setting up it was setting out to being a great weekend. 5:30pm comes around fast and everyone starts to show up to the public BBQ area at the Tannum Sands Discovery Park, there was a great vibe with all TCC members meeting each other for the first time, everyone sharing stories, talking different set up styles, tackle, electronics, boat options and go over the planned fishing itinerary for the weekend all over a couple cold beers (lots of banter too) and pizza that we had organised for all members & crew.

Friday morning the weather was predicted to be very average so we decided to launch a little later at 9am just so those who were new to the area could get an understanding of the ramp and a track out of the leads. We all steamed out to a patch of reef just near North Facing Island when on arrival there were already half a dozen TCC member’s fishing, so Brent Ferguson and myself decide to head to a few marks we had nearby with Harry Curley and Danny Jordin not far behind in Garmin’s Explorer 720HT. With a quick sound around the bait stacked up on the Garmin GPSMap 8416, Helm Master EX Fishpoint activated and the bait jig was straight down, barely making it to the bottom the rod loaded up with bait soon to be engulfed by something much bigger! Quick re-tie of a new jig and some fresh livies on board Brent sent one straight down and almost straight away his Wilson Venom rod was buckled over, struggling to get control of the fish it was no match for the heavy tackle and Brent landed a solid Gold Spot Cod.

With a good stack of bait in the live tank I had to get amongst the action and just like Brent the live bait was eaten almost as soon as it hit the bottom with the result being another large Cod. This went on for about an hour, every bait got thumped and the Cod just kept getting bigger and bigger and our arms sorer. With the hot action we had a couple of members nearby keen to get involved, Hoa Cheng in his Explorer 720HT pulled up next to us with similar results, Hoa also managed 2 cracking Bar Cheek Coral Trout off the same spot. Whilst the weather continued to get worse, we decided to head back in and get everyone prepared for the next day’s fishing as it was going to be an early start.

Saturday morning we had everyone launch at 3am as we wanted to be at the grounds roughly around sun-up, with the wind up the day before there was a lot of swell hanging around which made the run out in the dark a little slow. With everyone heading for the Guthrie Shoals we decided to pull up early for some filming and to fish a spot we had seen on Garmin’s new ‘Relief Shading’ that proved to successful. First baits that went down didn’t last long and a couple of just undersize Reds surfaced, the target species! Quick release, re-bait and Danny was ON! Fighting the whole way up it was showing all the right characteristics, we started to see colour and it was exactly what we were hoping, the first legal Red Emperor for the day. High fives all round, few happy snaps and straight into the kill tank. Everyone was buzzing quickly sending down the next lot of baits with high hopes and it didn’t take long for Brent who landed a very nice sized Tuskfish and Danny was onto another cracking fish.

With the action heating up we weren’t the only ones getting excited as Dan soon found out with his fish being his first payment to the local Taxman. Watching Danny fight a good fish and lose it to sharks while using heavy tackle I did what any crazy fisherman would do… grab the lightest set-up and send a big bait down. Fortune favours the brave and it didn’t take long until I set the hooks into what seemed like a good fish and it was now a tug of war praying the sharks don’t come back. The fished surfaced and it was another good Red, letting out the sigh of relief once it was in the net and on the deck. We then persisted with the spot for about an hour only to land a few more smaller reef fish and Brent pulling the short straw battling a big Chinaman.

With calls over the radio of members getting a good haul of reef fish at the shoals we decided to pack up and head out in search for some Coral trout and Lipper. With the weather getting better as the day got on and it didn’t take long to get onto a good amount of Lipper, it seemed like easy pickings as it was just one after another. After some time, Brent finally landed the first Trout which was a refreshing addition to the esky. Whilst we were out there chatting to all members on the VHF, we could just tell that everyone had a heap of nice fish on board and it was time to start making our way back to the boat ramp. Unfortunately for some it was slow ride home as one of the older boats had engine problems and had to be towed 120km back by Bush and Beach owner Ben Collins which earned him a Garmin Quatix 6 watch.

With the big day done and dusted we gave the boats a quick wash and went to bed as everyone was buggered. The next morning the WhatsApp was lighting up with images of everyone’s day, so I set off around the campground to see how everyone went and the smiles on the member’s faces was exactly what we wanted from this trip. Everyone was sharing stories of what they achieved over the weekend was mind blowing, from small Cruise Craft’s doing BIG km’s, kids catching fish and others catching trophy fish (Terry Donohue landing a 35kg+ Spanish Mackeral). With a handful of keen fishermen heading out that day making the most of their time in Tannum it was time for us to fillet and give the boats a wash while enjoying some fresh Sashimi and a nice cold beer. With the boats clean and the fish cryovaced it was time to sit back and reflect on what was a great weekend had by all. Can’t wait for next year!!

A BIG thank you to all those who made the weekend as successful as it was. Cruise Craft, Wynnum Marine, Garmin Marine, Wilson Fishing, Your Mates Brewing Co, TIDE Apparel & Yamaha Outboards.

If you own a Cruise Craft boat and are interested in these sorts of trips, please sign up to Team Cruise Craft via the website or email marketing@cruisecraft.com.au.

If you are looking to become apart of the Cruise craft family please contact your closest Cruise Craft dealership.