For Cruise Craft Owners and Enthusiasts! 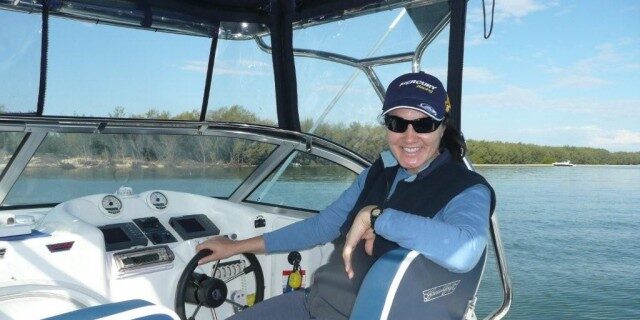 Sally Jones from Southport on the Gold Coast is one of Team CruiseCraft’s most active photographers. Here’s an example – a great sunset shot when fishing down the Pin (that’s the Jumpinpin Bar area between North Stradbroke and South Stradbroke Islands at the northern end of the Gold Coast).

Sally managed to secure personalised CC575Q registration for her Explorer 575 named Gizmo after purchasing it in … wait for it, Melbourne!

Gizmo is pretty well loaded with extras including a Stress Free anchor winch, Sarca anchor, LED lights throughout, a permanent CTEK M300 charger in the boat and a fold up bow ladder off the bowsprit. Rightly proud of her vessel, Sally even penned an editorial about Gizmo that was featured in Trailerboat magazine.

They thought it was pretty cool for a boating chic to write about her vessel – so did we.​